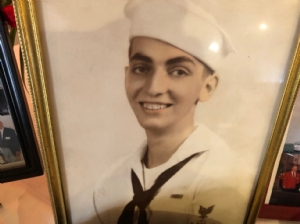 Derwent Dale Cartmell Derwent Dale Carmell born on May 16, 1924 Died October 6, 2019. Graduated from Columbia High School, Maplewood, New Jersey. Before graduating, he dropped out of High School during WWII to join the Navy, where he became acting Chaplin while on the Earl Olsen ship fighting the war. He served on two ships, USS Booth DE-170 and USS Earl K Olsen DE-765. After WWII, he returned to high school to complete his studies to receive his High School Diploma. During his return to school, he met is loving wife, Beneth Victoria Krasley (Cartmell) at his Grandfather's funeral. Three months later, they got married during Derwent's Thanksgiving break on Thanksgiving Day, November 27, 1947. They were married 58 Years before Beneth passed away November 25, 2006. They had two daughters, Deborah Donna Kellogg, her deceased husband, Sydney Milton Kellogg Ill, Sharon Rose Knoepfler her husband, Lawrence Alan Knoepfler. He leaves behind his grandchildren: Sydney Milton Kellogg Iv married to Carla Kellogg, Sherry Kellogg and Brian Knoepfler. His Great-Grandchildren: Megan Kellogg, Sydney Milton Kellogg V (deceased), Gabriel Kellogg, Michael Kellogg, Dharma Kellogg, Kenneth Puckett and Sierra Culley. Derwent went to Newark College of Engineer where he got his Diploma. He worked for South Orange Village in New Jersey Operating the Water Plant and retiring as Superintendent. He was a longtime resident in South Orange, New Jersey, before moving to his last resident at Hemlock Farms, Hawley Pennsylvania. He was involved in several organizations: the Kilties: VFW of Milford, Past Master of the Atlas Pythagoras Masonic Mason Lodge of Westfield New Jersey: and a member of the Milford Masonic Lodge of Pennsylvania. He was Representative of New Jersey to the Mason in England, Scottish Rite, American Legion, Destroyer Escort Sailor Association, and the Eastern Star. He was an elder to his Churches, Christ Lutheran Church in Maplewood, New Jersey where he was involved in the laying of the corner stone when building the church. Also involved with Hemlock Farms Church in Pennsylvania. During his retirement, he traveled across America and England, in which had a house. Later in life, 2010, he began traveling again with Sharon and Larry in their RV across America. After Beneth passed away. His pride and joy was traveling in the RV to Indiana to spend time with his oldest Daughter, Debbie and the Family. His great past time was fishing, salt and fresh water, as well as hunting